Power amplifiers (PA) are nonlinear devices and their linearisation is highly desired for a number of reasons. In case of radiofrequency (RF) PAs, linearisation improves power efficiency and subsequently reduces running cost of the wireless infrastructure.

Here we present the Lime Microsystems solution for PA linearisation, based on adaptive digital predistortion (ADPD), for which the complete solution is Open Source and will be made available on GitHub and the LimeNET app store.

The simplified block diagram of an indirect learning architecture is given below. Please note that RF part in neither the TX (up to PA input) nor in RX (back to base band frequency) paths are shown for simplicity.

The LimeADPD algorithm is based on modelling nonlinear system (PA and its inverse, in this case) by complex valued memory polynomials. These are, in fact, cut versions of Volterra series, an approach well known for general nonlinear system modelling and identification. Here, "cut version" means the system can efficiently be implemented in real life applications.

For a given complex input:

are the polynomial coefficients while

and the squared one:

Typically, the squared option is used in ADPD applications since it is simpler to calculate and in most cases provides better results.

In the above equations,

is memory length while

Based on discussions given in previous sections and using the signal notations of the above figure, the ADPD predistorter implements the following equations:

while the postdistorter does similar:

. The delay line is simple and its output is given by:

in order to minimise the difference between PA input

, ignoring the delay and gain difference between the two signals. Instantaneous error shown in the above figure is calculated as:

Training is based on minimising Recursive Least Square (RLS)

by solving a linear system of equations:

Any linear equation system solving algorithm can be used. LimeADPD involves LU decomposition, however iterative techniques such as Gauss-Seidel and Gradient Descent have been evaluated as well. LU decomposition is adopted in order to get faster adaptation and tracking of the ADPD loop.

The ADPD algorithm is implemented using a LimeSDR-QPCIe board, a high level block diagram of which is shown below. The LimeSDR-QPCIe board has a lot more options than shown, including two LMS7002M chips, a USB interface, GPS receiver…) The LMS7002M itself is a 2T-2R RF IC. For clarity, the block diagram shows the minimum hardware options required to illustrate the LimeADPD implementation. Regarding the implementation, the same signal names as in the previous figure are used here. 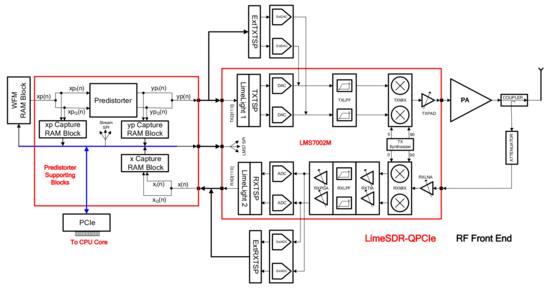 For development or demonstration, a test waveform is uploaded first and played from the WFM RAM Block. Initially, the predistorter is bypassed - i.e.

. The predistorter has provision for SPI in order to update the coefficients during the training. Signals

are captured using Data Capture RAM Blocks. Captured data is made available to the (Intel Motherboard) CPU Core via the PCIe interface. The CPU implements the postdistorter block, delay line, and the rest of training algorithm. After each adaptation step the CPU updates predistorter parameters via PCIe/Stream SPI.

In real applications WFM and

Capture RAM blocks are not required. The algorithm needs only

as shown in LimeADPD structure. The CPU Core performs both ADPD adaptation, as explained above, and baseband (BB) digital modem functions which are application specific, for example Long Term Evolution (LTE).

As shown in the block diagram above, frequency conversion from BB to RF is performed by LMS7002M transmitter chains. Frequency down conversion from RF to BB is implemented by only one LMS7002M receive chain dedicated to ADPD; in other words, one receiver of the available RF RX chains is allocated as ADPD monitoring path. In case of MIMO applications, the same ADPD monitoring path is used as time sharing recourse to linearise multiple PAs which saves power consumption as well as on board RF resources.

Before implementation and measurements, the ADPD algorithm has been thoroughly simulated. Simulation results are omitted from this document for clarity. ADPD performance has been measured and the results for two cases presented in this section.

Single carrier WCDMA Test Model 1 is used as test signal in both cases. ADPD memory and nonlinearity orders are set to

as a measure of PA output is distorted (plot 3). Waveforms

are very different (plot 2), resulting in huge error (plot 4) which ADPD has to minimise.

(plot 1) is predistorted in order to cancel PA distortion components.

as a measure of PA output is now linearised (plot 3). There is an excellent match between

waveforms in both time and amplitude scale (plot 2). ADPD error (plot 4) is minimised. Improvement in PA linearisation can be seen by comparing the 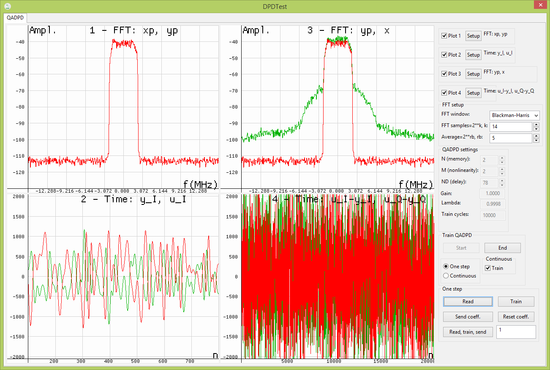 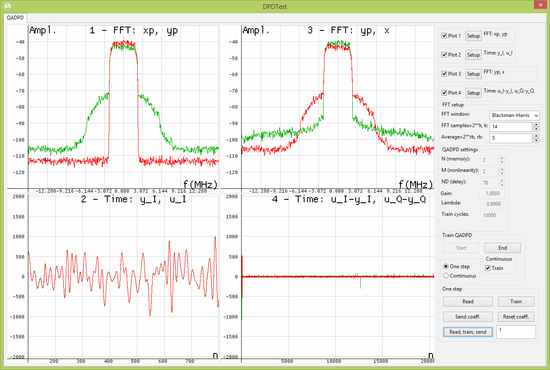 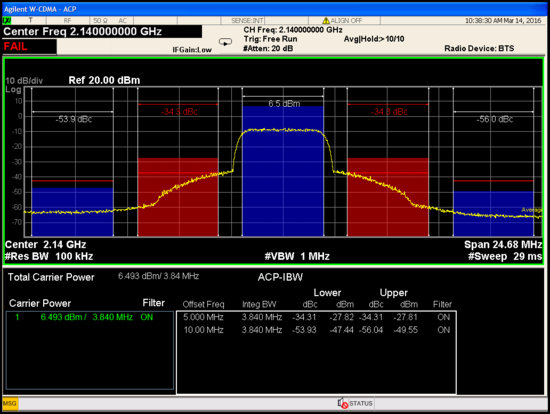 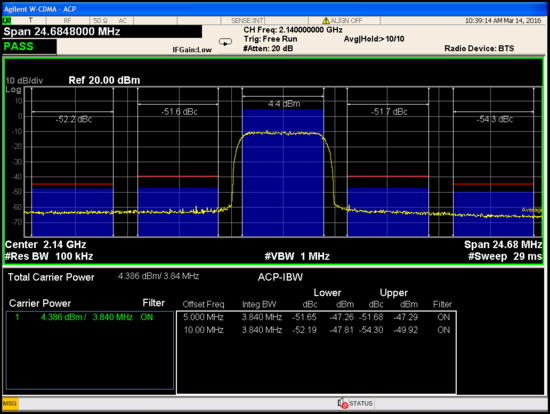 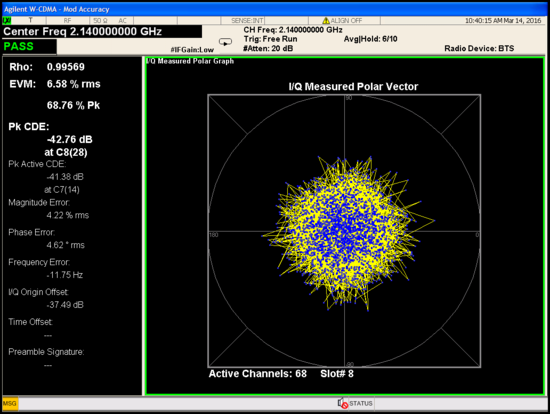 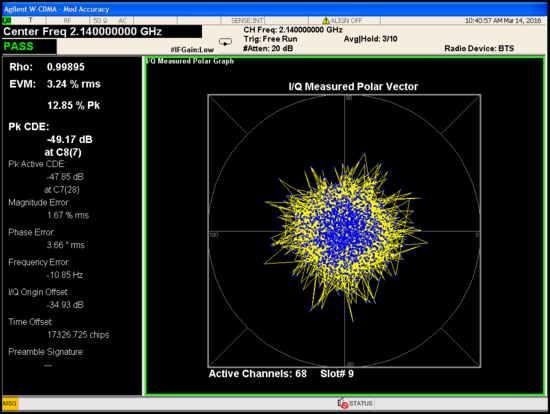 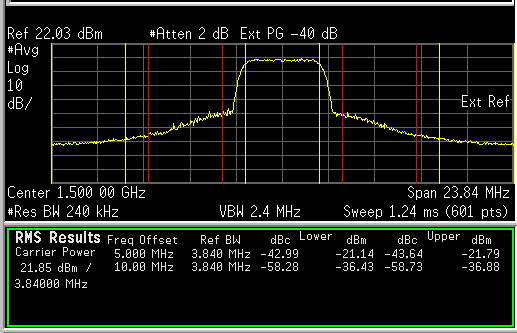 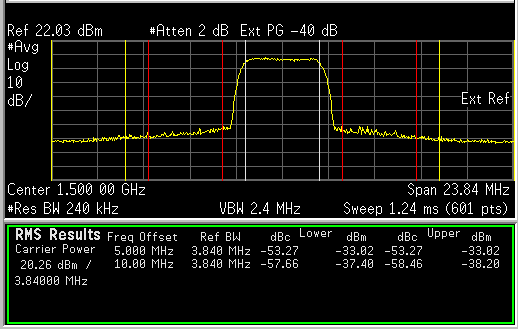 As far as linearisation is concerned, test case 2 is more challenging since there are two PA stages (MAX2612 followed by a Class-J GaN HEMPT amplifier) and both stages are nonlinear. Even in this case LimeADPD gives excellent results, i.e. ACPR is improved from -43 dBc (out of spec.) to -53 dBc (well within the spec.)