Difference between revisions of "LimeSDR-USB Board Programming"

This document describes how to program LimeSDR-USB board using LimeSuiteGUI and Cypress (for FX3 MCU only) software.

The firmware of FX3 MCU contains a functionality which enables to program FLASH memory FX3 MCU boots up from. In this case FX3 USB controller firmware can be updated using “LimeSuiteGUI” software, when FX3 MCU can boot from FLASH memory.

To call FPGA programing function, launch LimeSuiteGUI and connect to the board (see Launching LimeSuiteGUI and Connecting to the Board for more information). Then go to Modules from main menu and select Programing form the drop down menu, as shown in Figure 1. 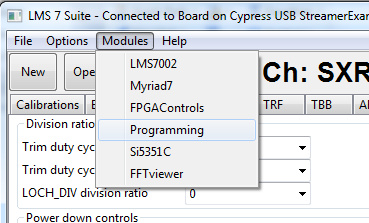 The new message will come up when programing is finished, as shown in Figure 4.

After successful firmware update, connect to the LimeSDR-USB board again as described in Launching LimeSuiteGUI and Connecting to the Board.

Cypress FX3 USB microcontroller has an integrated boot loader, which starts automatically after power-up or reset and when no valid firmware is present in the FLASH memory.

For USB microcontroller firmware upgrade, please use the “CyControl.exe” application from cy_ssusbsuite_v1.3.3.zip package.

If FLASH memory is empty or connector J17 (on LimeSDR-USB board) is open, USB3 microcontroller boots-up into bootloader mode. Cypress drivers from cy_ssusbsuite_v1.3.3.zip package must be installed first. Download the package here. Run the “USB Control Center” application and select Cypress USB BootLoader line as shown in Figure 5. 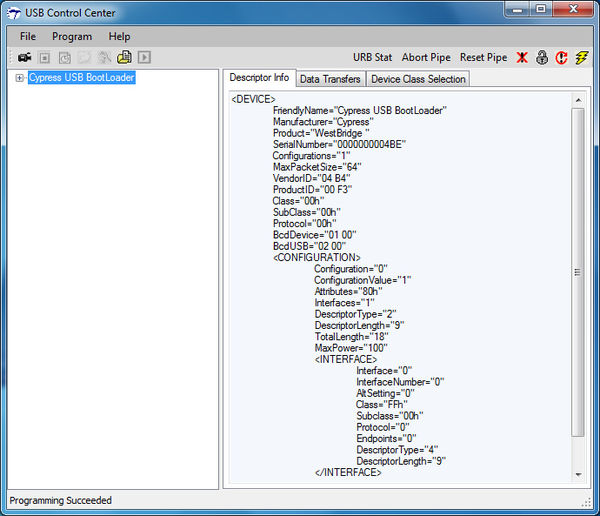 After entering into boot loader mode, there are two ways of uploading the firmware to USB3 microcontroller: