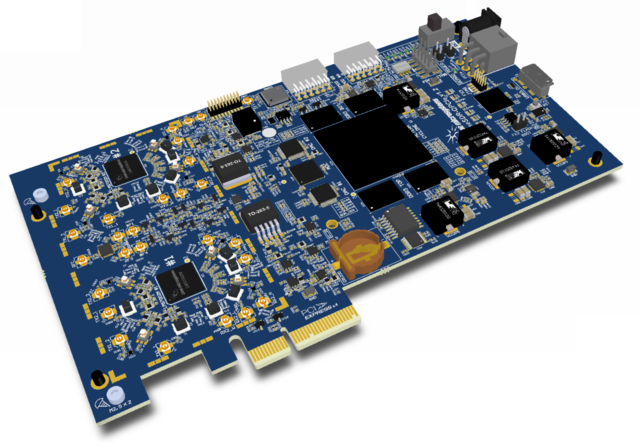 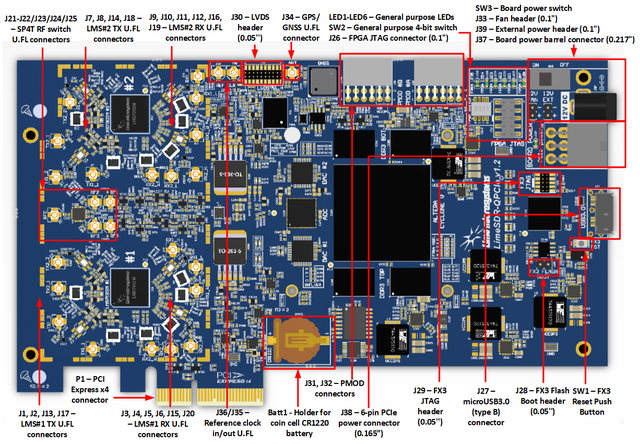 LimeSDR-QPCIe board version 1.2 picture with highlighted top components are presented in Figure 3.

LimeSDR-QPCIe board version 1.2 picture with highlighted bottom components is presented in Figure 4. 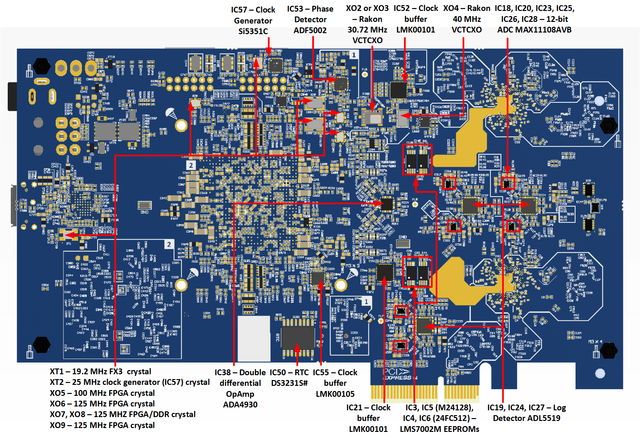 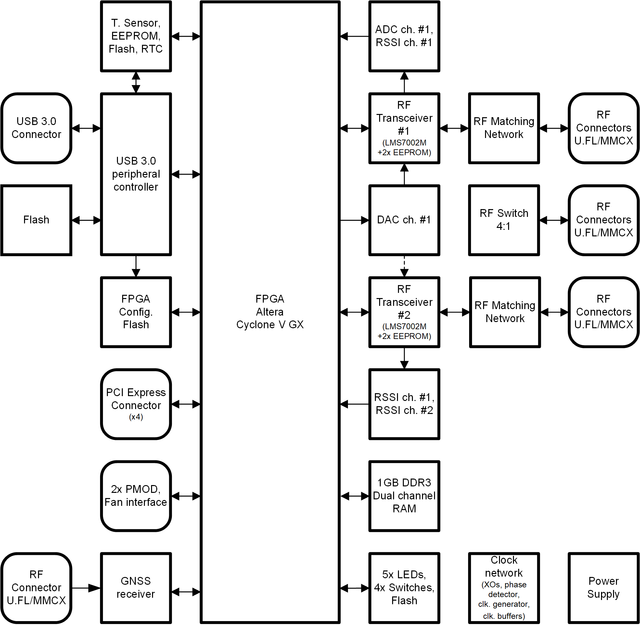 There are two options which allows to change configuration file in FLASH memory:

This chapter describes main components mounted on LimeSDR-QPCIe v1.2 board.

In the following manner interface and control signals are described below:

LimeSDR-QPCIe board has four 2Gb DDR3 SDRAM memory ICs (AS4C128M16D3B-12BCN [link]) which are connected to Cyclone V GX FPGA. The memory can be used for data manipulation at high data rates between transceiver and FPGA. There are two independent DDR3 SDRAM interfaces:

Software can control LimeSDR-QPCIe board via the USB3 microcontroller (CYUSB3013 (FX3) [link]). The data transfer to/from the board, SPI communication, FPGA configuration is done via the USB3 controller. The controller signals description showed below:

There is one Dual-Channel 14-Bit, analog-to-digital converter (ADS4246 – IC37) mounted on board. ADC analog input is connected to RX BB outputs of LMS7002M#1 IC. Digital output pins are connected to FPGA.

LimeSDR-QPCIe board has GNSS receiver module GPS/GNSS M0578 (IC48). External active antenna for this module can be connected to J34 connector. Module is connected to FPGA (IC29), pin connections can be found on Table 12.

This chapter describes connectors that exists on LimeSDR-QPCIe v1.2 board.

For data transfer LimeSDR – QPCIe board has PCI express connector with four lanes. PCI express interface is implemented in FPGA. Pin connection and corresponding signal names are listed in Table 15.

Two 10 pin 0.1” right angle PMOD connectors (J31, J32) are connected to the FPGA. A complete pinout description, dedicated FPGA pins and their I/O standard is presented in the tables below.

This chapter describes low speed interfaces on LimeSDR-QPCIe v1.2 board which are dedicated to communicate between various board components. 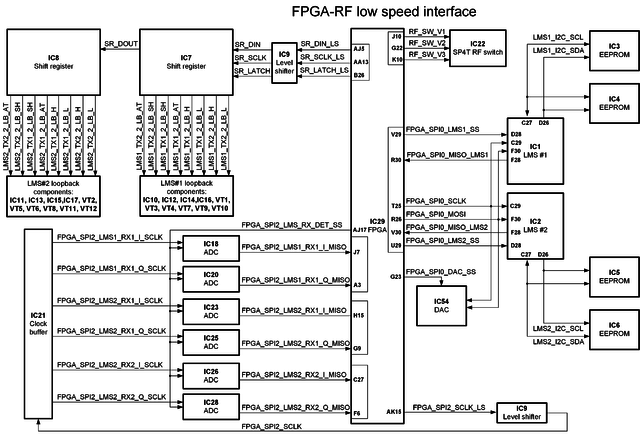 LimeSDR-QPCIe board peripherals can be controlled via USB interface. All commands that comes from USB are firstly processed by FX3 controller. I2C and multiple SPI interfaces provide connection to various on-board ICs, such as temperature sensor, port expander, clock generator, memory and real-time clock (RTC). 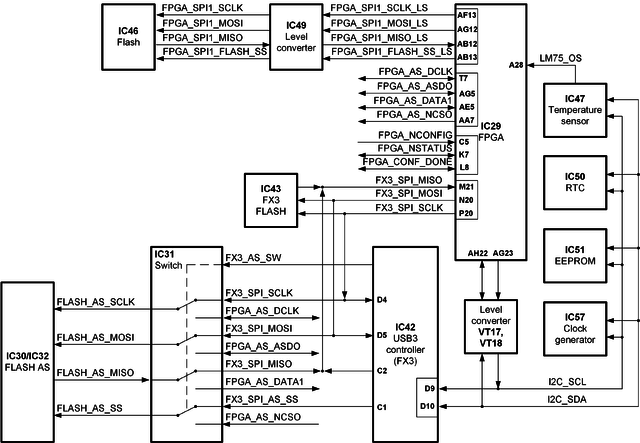 There are several SPI interfaces with their slave devices:

Board has three independent I2C interfaces: I2C, LMS1_I2C and LMS2_I2C. I2C – master of this interface can be either FX3 (IC42) or either FPGA (IC29). Master selection is done through R287 and R288 resistors. By default, master is FX3 (resistors fitted). To select FPGA as master, remove R287 and R288 resistors. This interface has several slave devices which are listed in Table 23.

This chapter describes available inputs and outputs of LimeSDR-QPCIe v1.2 board which can be used for user applications.

4 poles slide switch SW2 is connected to FPGA and can be used to implement additional functionality which requires input control. Each switch line has external pull up resistors. When switch is in position “On”, it pulls down the line to logic ‘0’ level.

In Table 30 are listed each switch line and correspond FPGA pins. 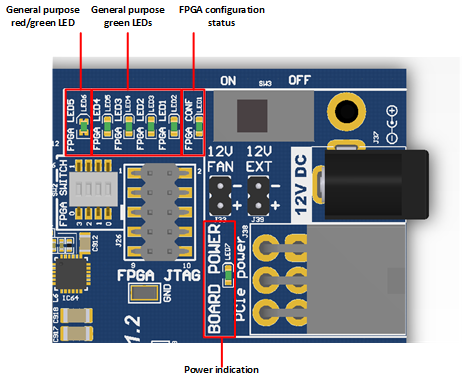 All LEDs are connected to FPGA and their function can be changed except for LED1. Default LEDs functions and other information are listed in the table below.

There is RF loopback circuit for RF transceivers which can be controlled from FPGA through shift registers 74HC595 (IC7 and IC8). Pin connection can be found in Table 32.

LimeSDR-QPCIe has integrated temperature sensor (IC47) which controls FAN to keep board in operating temperature range. FAN has dedicated holes for mounting over the main digital ICs (FPGA, DDRs, DACs and ADC) and must be connected to J33 (0.1” pitch) connector. Fan will be turned on when board heats up to 55°C and will be turned off when the temperature reduces to 45°C. 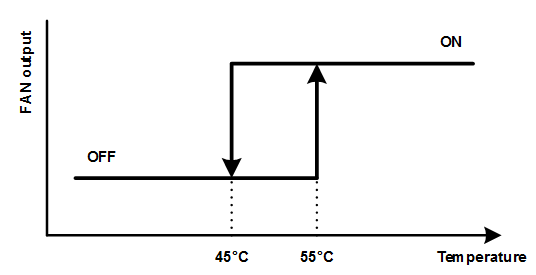 Measured temperature value can read by using LimeSuiteGUI as described in chapter “3.13 Reading Board Temperature”. LimeSDR-QPCIe board comes with a dedicated 60mm DC FAN mounting space. Three M3 exposed copper holes (connected to board GND plane) and a space for a standoff are provided and are shown in Figure 11. The hole centre to hole centre distance is 50mm.The FAN is controlled via J33 (0.1” pitch) connector which can provide either 12V (default) or a 5V supply rail. The gate of the FAN driving MOSFET is connected to IC29 (FPGA) pin J22 (2.5V/3.3V bank). 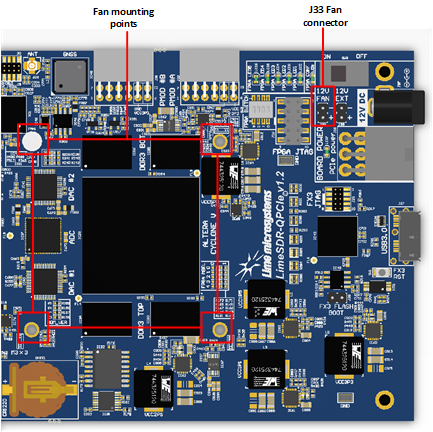 LimeSDR-QPCIe board clock distribution block diagram is presented in Figure 12. There are various crystal oscillators with various frequencies mounted on LimeSDR-QPCIe board. The programmable clock generator IC37 (Si5351C [link]) can generate any reference clock frequency, starting from 8 kHz – 160 MHz, for FPGA and LMS PLLs. A real-time clock (RTC) chip (IC50) is also included on the LimeSDR-QPCIe board. The output of IC50 is connected to the FPGA pin H17. Main clock sources and destinations are listed in Table 36.

CLKin0 – to select this input as a source for Clock buffer (IC52) R375 resistor has to be removed (removed by default). As a source for this input one of the following high-precision crystal oscillators can be selected:

IC52 buffer CLKin0 clock source is selected by one of the 0402 size 0R resistor combinations, required modifications can be found in Table 37.

CLKin1 – to select this input as a source for Clock buffer (IC52) R375 resistor has to be fitted (removed by default). As a source for this input one of the following sources can be selected:

VCTCXO can be tuned by on-board phase detector (IC53, ADF4002 [[2]]) or by 16-bit DAC (IC54). The on-board phase detector is used to synchronize on-board VCTCXO with external equipment (via J36 U.FL connector) to calibrate frequency error. At the same time only ADF or DAC can control VCTCXO. Both ADF and DAC are connected to FPGA_SPI0 interface. For details see chapter SPI interfaces. With valid configuration selection between ADF and DAC is done automatically. When board is powered, by default VCTCXO is controlled by DAC. 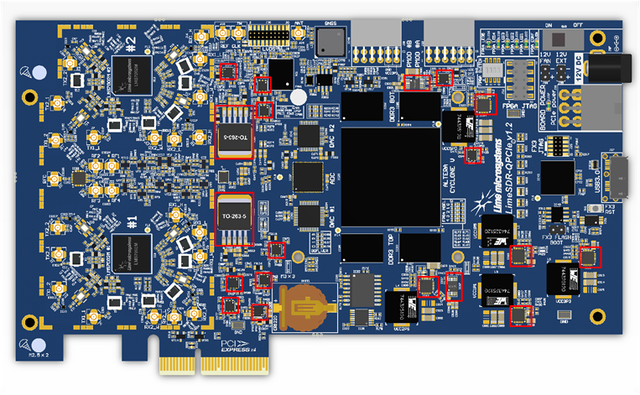 Figure 14 LimeSDR-QPCIe v1.2 board power ICs on TOP side 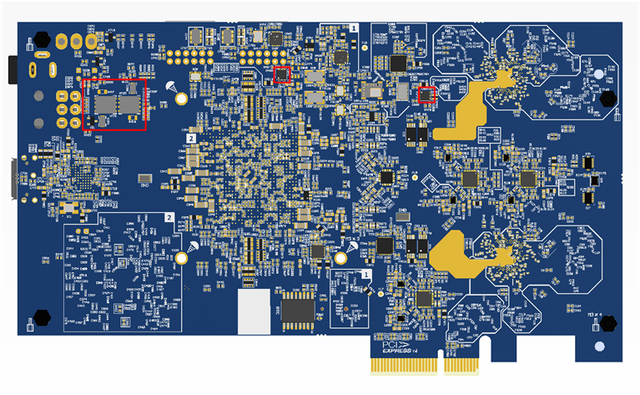 Figure 15 LimeSDR-QPCIe v1.2 board power ICs on BOTTOM side
Retrieved from "http://wiki.myriadrf.org/index.php?title=LimeSDR-QPCIe_v1.2_hardware_description&oldid=2041"